SQL on RISC-V Chip in Rust

It is honored to announce that TensorBase is the first SQL powered data warehouse running on the real RISC-V chip!

In the early of last week, we got one Nezha RISC-V SBC(Single Board Computer) which shipped with a single-core Alibaba T-Head C906 RISC-V chip made by Allwinner. We are excited to see if we can make some new interesting stuff for both Rust and RISC-V community. 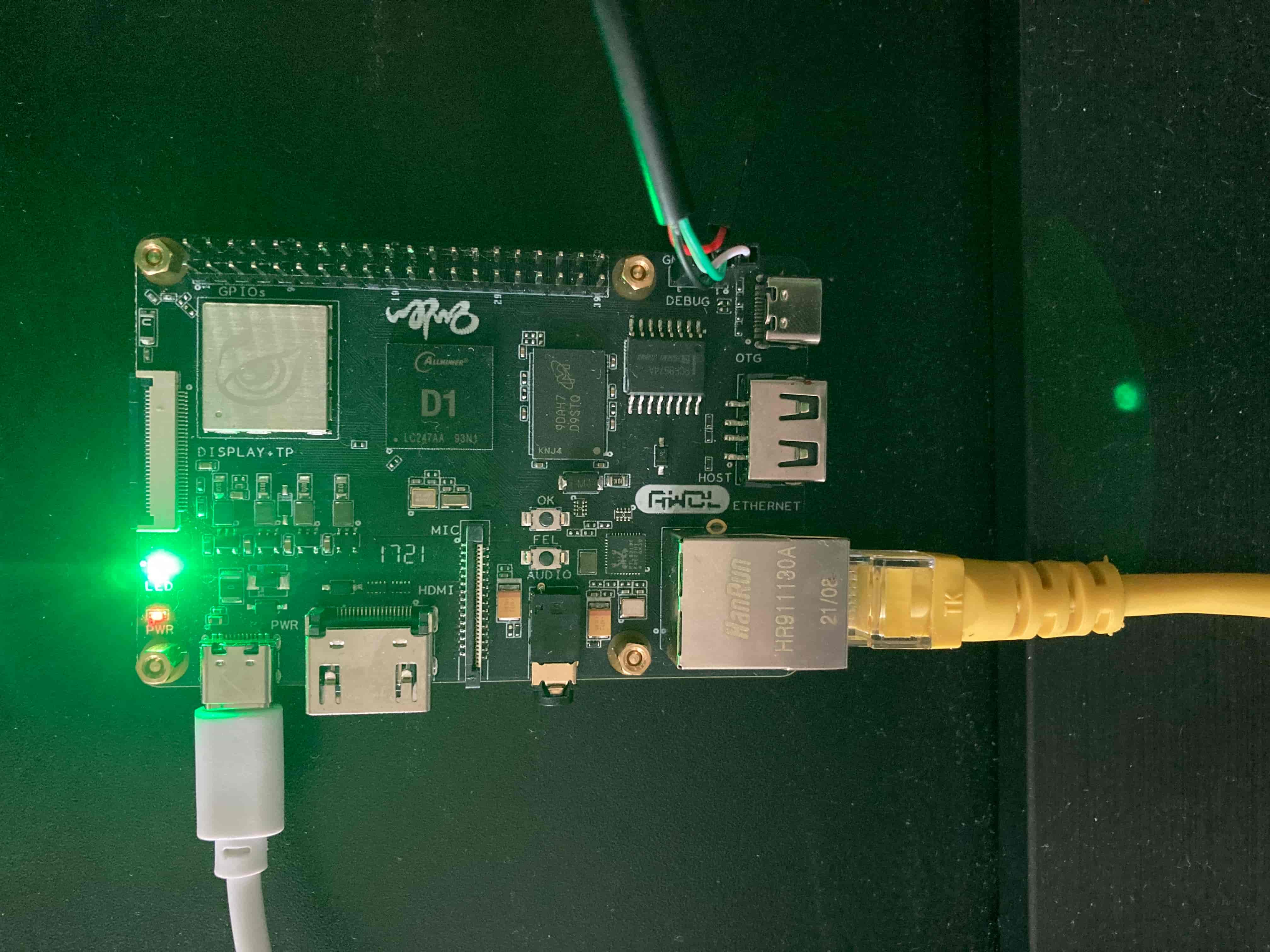 Light up the Nezha RISC-V SBC

If you are in the first time to develop for the RISC-V platform. It could be better to use the QEMU for RISC-V as your running and debugging target. As our evaluation, QEMU for RISC-V is one of most mature and performant platform for working with RISC-V.

To enable RISC-V development for Rust, you need install the target ‘riscv64gc-unknown-linux-gnu’ via rustup (or something way you like). Then, you need install cross-platform compilation tools like GCC or CLANG for RISC-V arch. And it is better to explicitly specify the tool commands in RUSTFLAGS way or as in our like config.toml.

There are many cross-platform-compilation ignoring feature warnings here. As our testing, these should but can not be eliminated by kinds of ways. So the only workaround is that you redirect the output into a file and check it with other tools.

There are several compilation errors happened. And it is simple to fix them. One of biggest change is that the cranelift side lightjit engine can not support current RISC-V target. As a result, the partition key expressions have been disabled by the removal of relative codes. This could be resolved that we use some fallback mechanism for partition key expression evaluations in the future.

With some verbose porting work, we finally make the TensorBaser server binary out. After another verbose processing of QEMU setup, we finally pass our TensorBase integration tests in the QEMU. Exciting! 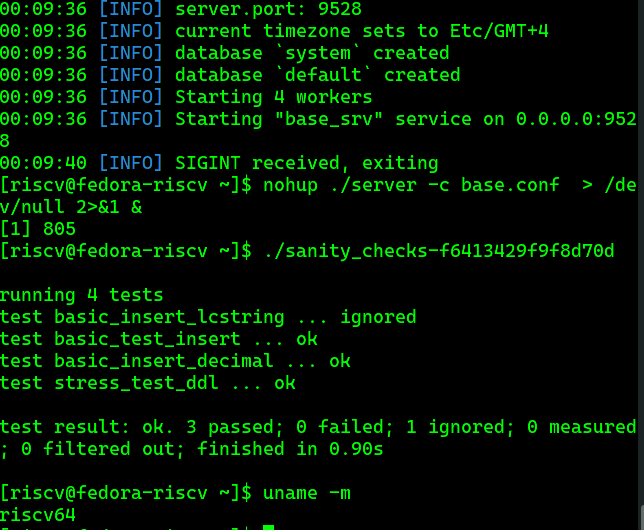 Checkout the sources here yourself!

Running in VM does not mean it can run in the real chip.

One of problem of Nezha SBC is that the ISA in C906 chip is a modified version and has slight difference to that of official RISC-V ISA. At least, we have confirmed that the TensorBase server binary linked by the official GCC RISC-V toolchain can not run on this T-Head C906 chip.

The solution is that you use the GCC toolings from Allwinner’s dedicated Tina SDK. After some still-verbose setups and compilations, we got the cross compilation GCC worked.

Finally, we successfully boot our TensorBase from a SD card.

Boot TensorBase up from a SD card

Compared to x86, RISC-V has a wonderful code density character. This will lead to less i-cache and image memory pressure, and finally favors better performance. We like clean works, and RISC-V has a bright future!

We use the sum aggregation to see how efficient the TensorBase engine of which some part is Arrow/DataFusion. We got 400MB memory scan done in 0.87 second, then our query runtime throughput is about ~450MB/s, which reached the 1/4 of max bandwidth. It is not bad as well, although this shows that the Rust RISC-V binary can not reach the peak memory read capability that seen in x86 cores. This may be relative to many reasons, e.g., compiler optimizations. This also shows that, there is a lot of work to be done for real chip development ecosystem.

In above memory benchmark, we see that the simple aggregation is ok on real chip. Here we do some more interesting SQL benchmarks.

In this query, we count the number of nyc taxi record in 2012 in the 100 million dataset. The result is terribly 44s. 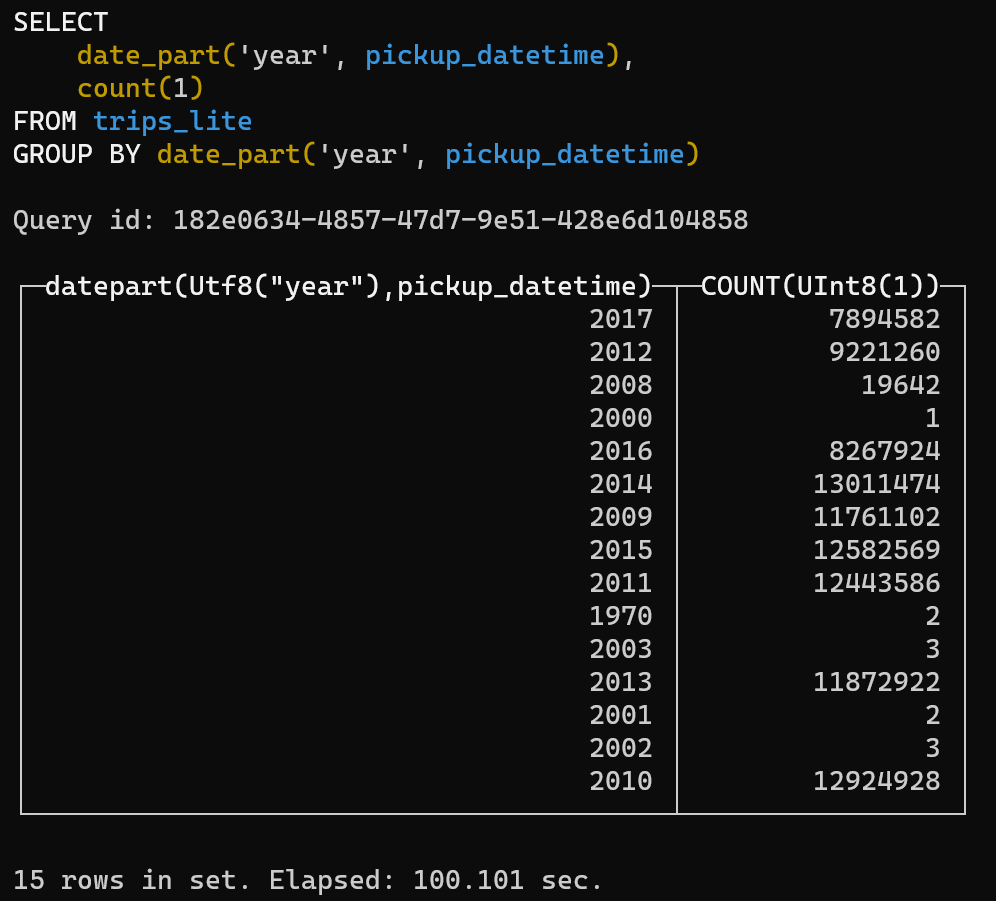 Boot TensorBase up from a SD card

In this query, we count the number of nyc taxi record in every year in the 100 million dataset. The result is ridiculously 100s, which is 30x slower than that of x86 core. Considering we only use a single 1GHz core, it is seemly accepted. However, it is observed that we have not made fully optimizations on kernels for all arch-es, which is the next step we want to help with community.

The uniqueness of T-Head C906 is that it is the first cheap enough and available real chip which has RVV support, although the implemented spec is 0.7.1 but not ratified 1.0. RVV and already available ARM’s SVE is considered as a more friendly solution for compiler’s auto-vectorization. For TensorBase and OLAP community, one big interesting work is how does the vector extension perform for accelerating data analytics.

Obviously, rustc’s riscv64gc-unknown-linux-gnu target does not support this vector extension. And more interesting thing is that several relative matured RISC-V simulation environments and VMs, e.g. QEMU, do not support the vector extension spec as well. This makes the prototyping works is a little challenging. One way is to build your own QEMU from the RISC-V maintained repo. We will show more how-tos in the future blog posts.

We are the friend of one RISC-V company StarFive, which is partnered with beagleboard. Therefore, it is expected that Beaglev as the next more performant and also affordable RISC-V computer will coming soon for our testing. It is also hoped to show some interesting results from SQL benchmark suites for the next coming evaluation.

TensorBase believes that an infrastructure that can adapt to the era, like the Rust language itself, must be open source and innovative. Therefore, we are excited to make open source data warehouse happen on the top of “open source” hardware!

Welcome to the TensorBase community to share your views and code, and to witness the thinking and iteration of the future data warehouse. We are a group of low level data and performance experts. In the TensorBase community, we work with Apache Arrow and Arrow DataFusion with our own unique OLAP(Online Analytical Processing) innovations to build the next five years of the Rust big data ecosystem!