EDITOR: For TensorBase, there are many changes from m0. What remains unchanged is the original intention of TensorBase to service all the people and business in this era!

Today, I am pleased to announce the milestone 0 of TensorBase (called Base for short as following).

Base is a modern engineering effort for building a high performance and cost-effective bigdata analytics infrastructure in an open source culture.

Base is written in the Rust language and its friend C language.

Base is a project from the “first principle”. That is, unlike many other NoSQL/NewSQL products which claimed to be based on Google Spanner or similar, Base is based on almost nothing.

The first principle for Base is just, only starting from current available commodities and software tools(a.k.a., languages and operation systems), asks three questions:

In the design of distributed data systems, there are two architectures often talked: shared-nothing and shared everything.

These are two extremes. Commonly, shared nothing is considered to be more scalable. But, it is suboptimal or even bad for non-trivial problems. For a database like product, nothing to share is awkward. For many global-viewpoint operations, it most likely requires global data movement. The remaindering is what/which/how data to remove. Easy to reason that a way of being ignorant of the environment and context is impossible to achieve the global optimum.

OTOH, share everything, in fact, is idealized. Image that we have single big infinitely expandable computer. All problem solved… So, share everything truly compromises on scalability and has requirements to hardware.

Shared Something is a dynamic best effort architecture sitting between shared nothing and everything, which achieves best performance via finitely sharing partial necessary contexts which are environments and computing dependent. This is just a highly abstract proposal in that Base is still in answering it. The direction to approach is, self adaptive computing via some shared infrastructures in the society of decentralization. Here, shared infrastructures do not mean centralized components. It could be just mechanisms to allow efficient information sharing/exchanging.

Scalability is another character often talked by projects. The truth is, good scalability does not mean high performance. Poor performance implementations are probably easier to achieve high scalability (in that you use a relative low baseline which may shows no bottleneck in any aspects). High scalability within low performance is cost expensive, economic killer and high-carbon producer…

Via architectural performance design, with Dream #1 in mind, Base is unique.

For short, the architectures are summarized in the following figure. 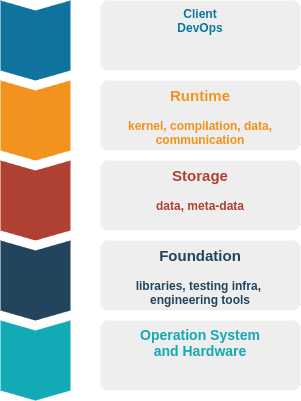 In this system, some parts are interesting, and some parts are indeed well-known (like in papers) but ridiculously no open-source counterpart. The details of components is out the scope of this post in that innovation big bangs here.

One of core efforts of Base is to provide a highly hackable system for the community under the guidance of Dream #2.

The system of Base is built with Rust and C. Rust lays a great base for system engineering. C is used to power a critical runtime kernel for read path(query) via a high-performance c jit compiler.

The rationale for C is that Base needs a jit compiler for full performance (it is pity that recently I see some project say its ability to call vcl vectorized functions as “fastest” database…).

By lowering the contributing bar, Base hopes more people can enjoy to engage in the community.

On the top of comfortable languages, the nature of “first principle” of Base, allows contributors to be more pleased to build elegant performance critical system with the help of the external excellent. For instance, to use modern Linux kernel’s xdp in network stack to enable a scalable and cost-efficient RDMA alternative on commodity network (io_uring is that new standard tool in lower performance).

Note: storage and C jit compiler in the system are not released or released in binary form in the m0 (they are under heavy changes) but will come later.

In m0, Base provides a prototyping level but full workflow from the perspective of simple data analysis tools:

New York Taxi Data is an interesting dataset. It is a size-fit-for-quick-bench real world dataset. And, it is often used in eye-catching promotional headlines, such as “query 1.xB rows in milliseconds”. Now, I compare Base m0 against another OLAP DBMS ClickHouse(20.5.2.7, got in July, 2020):

Note #1: The official ClickHouse configs are used. The bench tests run several times, and use the best result for ClickHouse. (Then, this is just an in-memory query in same hardware, no actual disk io is involved and the ClickHouse result is on par with officially listed single node result).

Note #2: it is interesting to see a bug in Base’s jit compiler: it is expected that the second run of kernel should be shorter than it first run.

Note #3: for showing the version of ClickHouse, the figure just picks the first run screenshot after client login. This does not affect the result in that the ClickHouse is in the server-client arch.

Here, what I want to emphasize that the performance of Base for such trivial case is almost hitting the ceiling of single six-channel Xeon SP. That is because the parallel summation is just a trivial memory bandwidth benchmarking loop. There are tiny improvement rooms stay tuned:

Although Base m0 just gives a prototype, it is trivial to expand to all other operations for a single table in hours. Welcome to Base community!

The true comparison is that, thanks to the appropriate ideologies (not only first principle…year-after-year experiences, practices, thoughts) and tools (Rust and C…), two-month Base can crush four-year ClickHouse in performance.

Base is ambitious: from storage, to sql compilation, to mixed analytics load scheduling, to client, to performance engineering, to reliability engineering, to ops engineering and to security and privacy. Take a glimpse:

If you are from Rust or C communities, please give Base a star. To help Base being the strong community voice: we can build best bigdata analytics infrastructure in the planet.

If you are having some of dreams which Base have, we are the same data nerds. Join us!